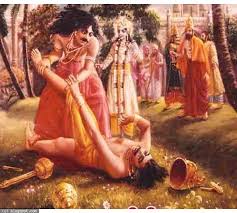 There is both a human touch and a political calculation here that suits me just fine. Allow me to don the toque of pundit qua Krsna, which means pure political calculation, something Krsna of Mahabharata makes sure everyone knows is a vital feature of _survival_. There ain’tgonna be nuthin’ else if we don’t survive, a lesson that the Yadava prince never fails to offer. Ask Jarasamdha.

All that, what is the calculation? Choose to win. Choose survival and progress as you can. The demons are not going away. The demons are always going to be there and even when they deserve no seat at the table you must deal with them and often make a deal with them. Yes, make a deal with demons. This has to happen. Or you fight to the death. That is not the preferable choice. There are costs no matter what and your friends can be disappointed in you even when you know acting in good faith and doing what you can wins no applause. But the way to progress is to seize the moment. When you have momentum, criticality has occurred, then take it. Inflection points must be used when they give you advantage. Under the entropic circumstances of the usual banalities, you must make the deal you can get or decide not to. So let us apply the model where Krsna wants victory to restore decency and live another day.

As I see it, two things happened.

First, Biden’s instincts are to bring things together, to work a deal. This is hardly that popular even when the partisan atmosphere is nothing less than liquid fire raging the landscapes of decency. People with strong political ideologies don’t fancy the compromiser unless _that_ is their ideology. You have to believe that the system of levers, checks, and balances delivers change slowly and then under criticality. (Have we arrived at such a crucial inflection point with BLM? One hopes.) But the process is always going to create unwanted features of any compromise: you lose something or agree to something that you would not prefer. Did you go “too far” with the other side? Did you sell your soul? Judgment calls all. Biden chose someone who does not present herself as a radical but as one willing to make a deal (within the systems of messy governance). All the while that same choice has deeply progressive ideas and values, looking to find their way into every compromise necessary. I believe that those are Biden’s instincts too. He will be as progressive as he can be to get a deal. Whether the deal is worth the cost is always the issue. But the instinct comes from being forward looking, progressive even. It is not arrived at with proposals that warm the left because they ask for things that scare people. It’s that simple, “defund the police” for all its _genuine_ meaning and wisdom might be the dumbest political articulation since the last time they failed to win enough hearts and minds. Stop scaring people, is the first summary point. Then move forward.

Next, how do you inspire people once you have stopped scaring them? Biden has done that by choosing a person of character, intellect, experience, who reaches into important issues of community and gender. This is the obvious part, no? But “inspiring people” means getting out the vote and that means WHO is going to vote. The Krsna Calculation is this: Biden/Harris reaches more deeply into moderate Black voters, college-educated women and white suburbanites than it does lefty educated whites or young people. The bet is that the lefty adults will show up sufficiently because they will finally act like adults after they stop being upset, disappointed, wringing their hands, foreboding of failure, and claiming they were robbed or that the DNC sucks. The further bet is that young people will not vote in sufficient numbers to make their inspirations worth the costs. Leap left with progressive youngsters and watch yourself lose the suburban middle just enough not to make up the difference. But really it’s simpler than that: college and just older? They never show up. Not convincingly enough to bank on them. Assign them a term paper with 15 weeks of lead time and watch them make excuses why they couldn’t get it done. Sorry not sorry true: also Krsna Calculation candor.

So Biden did the obvious thing which is sometimes the best thing. Turn out in PA, OH, MI, FL, AZ, WI, NC and this nightmare is over. Then healing and rebuilding and looking forward. Harris will heal, rebuild and urge Joe forward. But forward will be the “surprise.” You see when the white nationalist rich and stupid complain that this is a “far left, radical” agenda, they are not _entirely_ wrong. Most of their fears are true: judges, regulations, the rule of law, police reform, education, civil rights…all of those things will be on the agenda. Rage on, calmly.