Skip to content
March 3, 2017March 3, 2017Douglas BrooksLeave a comment
Candide’s Advice and Gift of the Red Worm or
How to Swallow the News in the Age of Trump
I’m well known for my immoderate indulgence in words and irritating syntax.  When I don’t know what will quite else suffice to soothe my inner beast, I dulcify myself with literary desserts.  Then I inflict the whole jumbled confection on others.  This is the shameless prerogative of a college professor assigning on the pretext of intrinsic merit and edification the very work that he needs in order to mollify his own inner monsters.  Currently, my students, in the course I call “Advice and Dissent,” are charged to read Volatire’s most requisite work, “Candide, or The Optimist.” 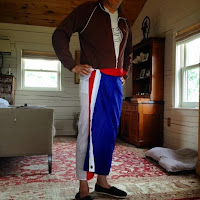 That 1759 looks a lot like 2017 is a credit to more than Voltaire’s resilient wit. Voltaire’s capacity to laugh and indeed to mock our shared human folly to look for the bright side when we are surrounded by a horror we cannot wholly attend is every bit as relevant today as it was during Le Révolution.  L’accent aigu has also never seemed more requisite to make it through my day.

Like you, I routinely wake to read the next untroubled lies from Donald J. Trump who received enough votes to be President*.  And like the vandalized majority I’m torn between dread of his repugnant ubiety, strewn as it is across every news source, and the deeper consternation that his electoral victory continues to win wistful approbations of unyielding, thoughtless support from half of our witless country.  When he appeared this past Tuesday before Congress to present an hour of exceptional temperance masking the same detestable and chilling racist vision of ethno-nationalism, the American commentariat, from the dark bastille of their own forlorn hopes, pronounced him “Presidential.”  None with even a verisimilitude of sanity knew that would last.  As Durkheim reminds us, nothing of value will endure based on lie and deceit.
Candide himself disabuses us.  He says, “Optimism is the madness of insisting that all is well when we are miserable.”  Who knows better than the French how to make themselves miserable?  Camus anyone?  Lest we overstate the case, let us embrace the paradox that this same culture gave us lejoie de vivre as well as le croque du monsieur.  And where would we be without recourse to gauzy cheese and thinly sliced peccary?   My inner bon vivant repines in celebration of any gastronome who can digest even the most lean collation of Trump’s daily fodder.  I find myself attempting to desist from dyspeptic attitudes that diminish even my irresistible penchant for alliteration and allusion.  Voltaire surely spins a graveyard’s worth of hauteur for that last sentence.
So how do we retain a semblance of animate geniality in this age of earnest gloom?
Yesterday that same Fourth Estate, the one that detoured to declaim Trump’s momentary foray into banal lucidity Tuesday night, recovered its marbles.  They are, at least at the Times and Post, doing the work that only they can do.  Determined journalists are usually fraternizing introverts who cull, cumulate, and coerce information with all the aplomb of sharks chummed to dinner.  Bless them.  Sessions may indeed be forced from ghd stage and, if Republicans have scrap of decency left among them, well then there’s far more to fall.  I realize I just said “Republicans” and “scrap of decency” in the same sentence and I can hear you snickering at my gelastic simplicity.
It is a far easier route to assert only the worst in us and somewhere under this drizzly rainbow there must be enough waggish encouragement that all is not yet lost.  We await a more honest mirth.  In the meantime, read Voltaire and remember what the great Chuang-tzu also said: “One good laugh is worth ten thousand serious thoughts.”  Unless of course you read the news.  Then go back to Voltaire and be sure to make yourself a croque du monsieur that you can wash down with a tall shot from Oaxaca.  Get some of that fine mezcal before they build The Wall and don’t forget to have gusano rojo for dessert.  The French will applaud that too.  Maybe.  If that doesn’t appeal we can try lobscouse and spotted dog, but that’s a whole ‘nother story.