Skip to content
February 27, 2017February 27, 2017Douglas Brooks2 Comments
A VERY Brief History of Making America Great Again and a Bit of a Warning.
This one is written with the gloves off.
Ruminations on The Plantation Owner, Reagan, and White Supremacism
First, have a look at the photograph I took at the local gas station donut shop parking lot.
There are Confederate battle flags everywhere out here in rural western New York. I drive by this Dunkin’ where the counter kid’s beat up pick up truck has the Confederate’s flag painted the length of the tailgate. A stroll through the local cemeteries show that they are filled with Union dead. So what’s going on? 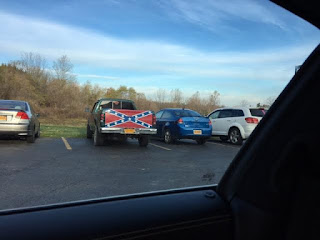 I’d venture to say that most of you reading this live in places with significantly more cultural quality and social diversity than my little corner of Appalachia’s End. Here, some 40+ miles south of Rochester, it’s pure Trump country: old, white, rural, poor, sick, addicted, and uneducated. The exception are the wealthy second homes on the lakes. Our DeadRed Congressman was the first to endorse Trump because he knows his constituency. There are noteworthy exceptions to this intellectual bankruptcy, because there always are and we’re really, really lucky to live next to some very swell people.  But the exceptions don’t describe the majorities. Those are borne out by the numbers, the elections, and the facts on the ground.
Today with Trump’s budget announcement —drastic cuts in everything we care about and significant increases in military spending— we witness the long term outcome of Post Reconstruction, the 1980 Reagan election, and the rise of white nationalism. Paul Ryan will soon have his way, make no mistake about it. This budget is Ryan’s wet dream and he’s gonna get it. Death to Big Bird, the environment, and education. Long live guns and Jesus.
A bit of history needs to be made obvious to us. First, the Plantation Owner’s key take. You must shift the conversation from class to race. Bigotry is an easy emotional sell, economic rebuttals take time and thought. This is how you make sure that poor whites find no allies in other people who share their poverty, particularly brown people. Next, make sure Reagan’s Revolution is in full form: cut education and arts and everything that is government, cut taxes for the wealthy, spend more money for war toys. Now add that last dose of white nationalism —change is coming from brown, gay, different people who want a different America— and it’s a perfect alchemy of history.
Low income rural whites will agree to starve the beast that they have been told is bilking them for brownie while the military complex makes a tidy profit. The rich laugh all the way to the bank while they profit from deregulation and tax benefits. In effect, the trifecta of Confederacy, Reagan, and Bannon explains my western NY: Poor whites fear change and regard the “old days” as better; the real enemy is any one unlike themselves —-and they should be free to do whatever they want. It’s those Others who are taking and insisting on their cultural inclusion rather than submitting to white assimilation. Liberal Elites spend our money and care about things we don’t want. Raise the battle flag, paint it on the back of your pick up, put a sticker of Calvin pissing on Obama right next to the one supporting the NRA while Rush blasts over the AM. Now that’s some freedom of expression.  Fake news be damned.  Welcome to my every day America.
The Reagan/Plantation/Trump Idea is self-fulfilling because everything that would change that scenario— public education, health care, child care, etc., only gets worse. As people are less educated, they are more easily conned.  Greatness awaits us.
So why will this Trump Ryan McConnell budget pass? They have the votes.  And because the significant portion of America that prefers a steady diet of Doomsday Prepers and Limbaugh won’t care that there are no arts or investments in the humanities. They will cheer when BannonTrump sends us to war and will think it patriotic to send their children. They don’t care that the rich get richer or that the liberal expenditures that maintain water, roads, schools, and the rest will be eliminated. How would they notice?
When all of this goes so very badly for them, they will blame it all on the liberals.
Here in rural America people will be delighted that the rich coastal elites will be forced to pay for their pleasures. After all, “art” is for sissies and education doesn’t require school. When my neighbors can’t get healthcare, when their retirement is abject poverty, their health is in ruins, and their children are dying of heroin they will blame the liberal elites again. This is the course of history right before our eyes.  Until we understand just how history does its business, we can’t change the future.