You can always count on the lessons of religion to help you explain the worst of politics. That’s because both are rooted in fraud and some kind of hope for the better. We’re so confused about that we can’t quit. If there is a best too then never forget it comes with its shadows. But let’s not get too deep, too soon. Some lessons are simpler than that. Skip to the last paragraph if you don’t have the time.* 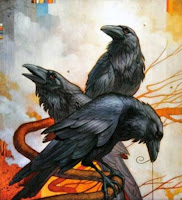 Religions not only offers up saviors but in the case of Indian religions, all kinds of saviors that you too can aspire to be. It’s not a one off, like Jesus or Mohammed where you get mere aspirational “be like.” Indian religions give you the whole entrée (indecisive accents): Sure, Buddhas are really really nice, Siddhas are generous in their irascibility and mayhem, and Tirthankaras come, well, naked. Who doesn’t wish they were? But the scam is on. Add “guru” and you’ve been had. Who doesn’t wish for Swami Somebodyananda or that they could be? Have a seat. But don’t sit in SwamiJi’s seat. That’s taken and you’ve been too.

Americans don’t vote who they are but who they wish they were. It gets richer than that once you suggest that who you want to be also means punishing demons. You can’t quite ever destroy them—demons alchemize in a world in which things don’t disappear—but you can make them pay for their sins…umm, crimes, it doesn’t quite matter. Don’t sell them short even when they are dumb. Dumb often wins. Trump won. Think 62 million American idiots.

And this whole Satan thing is typically mixed up theology like most western conceptions of most everything religious but once again we have other fine examples of complex panthedemons (that’s a word I just made up because you can do that, think: pantheons but with demons). India comes through again. Jai Hindustan hai.

And wouldn’t ya’ know? Pick your demons, they are real.

We have the uber-rich for profit as all that matters Republican; we have the dumb as rocks (apologies to rocks) aspirational poor guy who wants to be rich and is playing the lottery every week with every spare dime (ummm, that last bit is cutting close to home); we have the bigot blaming otherness either shamelessly on display or thinly veiled, it matters not, because the deeper play is some dark stuff, often without the slightest shard of self-awareness. Then we have religious fanatics, gun fanatics, free market fanatics, we have a coalition of all sorts of wing nuts, extremists, and politi-cons ready to con and be conned. We have attested versions of pure evil (think: Cruz and McConnell), evil couched in a complicated past that you once thought had a conscience (you were mistaken) (think: Lindsey Graham), evil that is stupid and just gets busted but will likely get off (Chris Collins, first to endorse Trump and reelected in my Congressional district while under indictment, the wealthiest of the lot “serving” a poor constituency), evil that doesn’t care about anything but evil (Manafort, Stone, the opportunists), evil that can’t quite fathom that it’s doing evil because it somehow can’t think (Susan Collins), evil as an intelligent pathology (think: “conservatives” like Sasse, Will, David Brooks, et.al.). And then the Orange Menace which is the meanest, dumbest, most fucked up of all evil, which is why he will never lose that 34%, not ever.

So much evil, so much plentiful stupid, never a shortage of pathology, and all of it driven by some ability to collect in the same place aka the Republican Party, all of it incapable of even a shard of the truth which is that it is nothing but self-interest working for its own self-interest. All this is the veritable definition of demon in Sanskrit lore.

We vote for what we wish were true because reality, well, that’s far too hard. We underestimate how deeply structured we are towards self-interest—those selfish genes are real—and how so much of our altruism is ambition or necessity. We’re so famously deluded we think that consciousness came before consciousness evolved from chemistry (think: the foundational error of Kashmir Shaivism that can’t be repaired, fixed, or rationalized because it’s simply wrong) or even worse we think that “freedom” is something innate, a self-evident truth, when, in fact, freedom is learned, it must be taught and revised and retaught and that it’s not one thing but a million different things that we don’t fully grasp but want. We’re capable of any kind of self-delusion to get by in this hard world and that’s not a crime at all. When you can choose your discomforts that’s a definition of privilege you might embrace. The rest you didn’t earn.

We lionize those who sacrifice themselves and call them saints but if we all did that we kinda’ know that the whole real world would just fall apart. Only be a saint if you are one. Please don’t play one in the yoga world. We need more someones to fight back and never give up because the bad guys who want everything for themselves are not going away—that turn the other cheek nonsense is about as free as a Free Tibet bumper sticker. It’s so free that the Chinese just moved in and ate your tsampa. Fighting back never wins you all that much joy in life unless you figure out it’s what you love more than comfort. What exactly do you love more than comfort? Now that’s a marginally more interesting question.

*busted…
Take away: don’t stop wishing for what you want or stop trying to be who you want to be. But do ask yourself if there’s something in it for more than just you and yours. Ask yourself how discomfort makes you more interesting and purposeful to some end that serves you _and_ others. Make plenty of room for the demons but don’t exactly give in to them. Treat your demons better than they treat you. Not only is that the right thing to do, which actually feels good when you do it (like giving money to public radio or something), it’s actually the most efficacious choice in a world in which the best of us have to live with the worst of us. The most important thing is to remember that each of us is both that best and that worst of the all of us.