Skip to content
September 28, 2019September 28, 2019Douglas BrooksLeave a comment
First, a few paragraphs of hard to accept truths.  I’ll let you know when we’re closer to a prognosis for better.
One of the hardest lessons of our nation that elected this shameless anarchist racist imbecile is that his slogan really does tell it all. They want to go back.
Of course they do. Back to when and what exactly? It’s perfectly clear.
We as a nation are not better than this and that is another meme that may be politically necessary to have any chance but in fact contributes to the delusion. When folks say ‘we’re better than this’ they postpone the more serious conversation, the one that we need to have if we are _ever_ going to be better than this. And that’s the problem. It’s a problem that I submit we are not prepared to solve. Even if the planet burns. 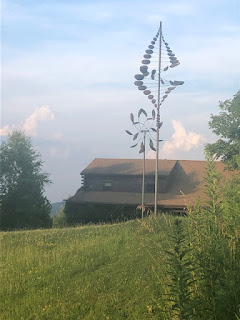 America has not only always been this failure of ideals, it was built on its own hypocrisy and denial. It isn’t going to evolve to its ideals with any alacrity unless it goes to these very uncomfortable places. And it won’t. Some of us are willing to have those conversations. But few of those willing have any strategy for reaching those who do not share our understandings of America’s original sins. I can assure you that counting on the fact that the average age of the Fox News viewer is 65 years old won’t help. The forces of stagnation, regression, and repression are not going to be persuaded by an intelligentsia speaking the truth and waiting for the light to go on or the old white order to die off. Instead, let us begin with the observation that Trump is not an aberration. He isn’t a mutation of the “real” American values. That’s why so many of us have “friends,” blood relatives, and dozens of people we know who are his supporters.
We all want to be charitable, especially to those we know and love. But the verdict is in and it will become plainer still as the impeachment goes forward and he becomes more panicked, angry, and unhinged. Today he called elected representatives—women of color, people of Jewish heritage—“savages.” As so many of his supporters say they like him because he is unfiltered and tells it like it is. Trump is the face _and the brains_ of an America that his critics do talk about but one that we can’t wholly reject because they are _in fact_ in our families, our neighbors, and there are a _lot_ of them. They are our fellow Americans and what we know now is that this mean, nasty, racist, bullying America occupies every town, city, county, and state.
If we look in the mirror and admit that the devil is us, what _can_ we do next? Trump’s America may not be the majority and they may not be the future but neither are they simply going to have a change of heart or be persuaded by some factual argument, some appeal to religion or commonsense. What makes it incorrigible is what has _always_ made it incorrigible: this kind of small-mindedness, fear of the other, brutality, and ignorance is endemic, it is built into the core of American religion and forms an armature of our history. Those who would reject this structural observation always have a stake in the power that they refuse to share.
Now, the way to rebuild the foundation.
So what _is_ the solution if there is no serious chance to remake the country building towards its ideals? I think the Right has already understood this: they _know_ they have lost the culture wars—guns, god, brown, women. But what they have had is a plan that works _everyday_, little by little, relentlessly to insure that _their_ agenda rules. Given demographics and the anachronistic operation of our government’s organization (a Senate the represents real estate, not people; an electoral college that privileges a system meant deliberately to deny one person-one vote, etc.), the Republicans know how to _use_ that structure to their advantage. And do. Everyday. Relentlessly. So what can be done if these forces and structures of regression cannot be seriously addressed? Because they won’t; because we _refuse_ as a nation to have the honest conversations we would have to have with Uncle Bob or Mary from high school. The answer is right before our eyes. The Republicans have given us the structure of the plan, all we need do is pay attention.
Everyday, little by little, with as little compromise as is necessary but with just enough not to lose the day, Democrats and progresses must do two things.
First, they must act as if everything they seek _is_ the case, will _be_ the case, and cannot be taken back or taken away. Next, they must formulate a plan from the ground up to _show up_. They must vote for compromise candidates when they have to that can be turned or can hold the space from a right-winger until the next more progressive candidate can take that seat. They must extract every bit of victory—again little by little—until things have changed and can’t go back. The reason that “big structural change” (yes, that’s Warren) won’t succeed, even if it manages to win the presidency, is that you can’t move a structure from its foundations if those foundations are corrupt.
Americans refuse to admit that our ideals have never really been the truths we now mean them to be. Americans are too lazy, desperate, busy, pre-occupied, illiterate, and incapable of doing the very hard work of citizenship that would remake our values to meet our ideals. But that doesn’t mean things can’t change or get better.
So second: it means that we need to do the work _everyday_, often in small ways and in compromises we hate, but that add up and add up. Don’t relent. Don’t lose the plot. Have a plan that will work even when you must adapt and adjust. And most of all have the courage and the wear withal to _lead_ the way. Impeachment is coming. Americans need a simple story, leadership, and a clear destination—albeit for now. Real change won’t happen if you ask for what is not yet on offer. If this argument sounds like the deeply flawed Lincoln or Obama that’s because they saw greatness in the long view and success as merely temporal. Carry on.