Skip to content
August 24, 2019August 24, 2019Douglas BrooksLeave a comment
When Thomas Hobbes published Leviathan or The Matter, Forme and Power of a Common-Wealth Ecclesiasticall and Civil in 1651 I was still a lad. I jest. But I was assigned The Vast Work at least five times in college for classes in both philosophy and political science. I have reread it countless times, a privilege born of my Sinecure that I mean to Use for Good even as I Acknowledge its Potential Abuses of Privilege. (<—hint, hint…). Hobbes is no Cartoon Tiger. 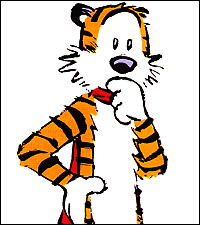 Hobbes argues for an autocrat, one both brutal and beneficent. His title comes from the Book of Job, of course, and refers to a sea monster (more than any whale as such, fie on King James and His Bible, I say). It likely refers to the unruly and composite enormity of the project of the universe, of human nature, and the power of political force. God spare us. God notwithstanding Scrutiny for Existing at All.
While Hobbes’ theories of government are far from enlightened, his understanding of human nature is as trenchant and provocative as ever. He argued, for example, that there is no faculty beyond the human mind to determine our nature and that good and evil are constructs based on sentiments rooted in desire. Downright Buddhist of him there, I’d say, and good on ‘im.
When Hobbes writes about memory, which is a section to which I often return, the work points centuries forward, even towards modern cognitive theory. What is ever-present is Hobbes’ 17th century style, which poses threats to our comprehension and sometimes to our sanity.
You see, there is a prodigious and often indiscriminate use of capitalization. I think it has much to do with the carry overs from Germanic languages into English, that is, that nouns are by default capitalized. But the matter is hardly consistent. Spellings are conventional for his period but unfamiliar to our modern eye. Diction is complex and challenging as much for expression as for comprehension of difficult ideas. 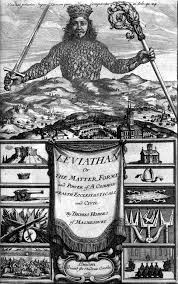 In short, it’s a Big Thing involving Compelling and Strange Matters that not only made lasting impact on me but warrants a short Comment for the sake of Comparative Metonymy. I have in mind our own Leviathan, the Beast in Orange and so Hereby Decree as He Himself would that Tweet Storms filled with Arbitrary Capitalization are only Hobbesian insofar as his penchant for Brutal Autocracy is, in addition to so much else, a Lethal Feckless Calumny and Assault on Modern Grammatical Dignity. It may appear Trivial to cite this Offense given the Magnitude of the Monster himself.
I do note this as an Occasion of Value to consider Further how certain words from Hebrew, in this case, liwyāthān have made their way into Late Latin leviathan then to Middle English levyathan, and so to Hobbes’s English but let us Not Toil further since We all know that Trump cannot Read much less consider Etymology. Furthermore, this is not 1651 though We might be Confused by the BiglyNess of the Crimes.
Trump has Jobbian Delusions, no doubt: Non est potestas Super Terram quae Comparetur ei. Iob. 41 . 24″ or as We say in the Modern Tongue: “There is no power on earth to be compared to him.” Job 41.24. Let there be No Doubt. But Trump is no Hobbes, even if he is a Monster of Vast Girth, Authoritarian Imbecility, Anarchistic Predilections, and Wholly Incapable of Getting This Joke. On Him.