I hope it’s appropriate to begin MLK Day celebrations by also making a connection to our American Founders and to Lincoln. We always need perspective to create a vision.

To fathom what Dr. King was asking of us is to acknowledge the inexcusable failures of our American founding and yet to “conceive in liberty” who we might be, who we want to become. Allow me to start then with Lincoln. Like all great leaders, he was a complicated man. But eventually he put the matter plainly. 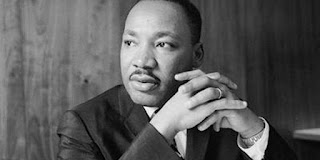 Yes, Lincoln was a deeply flawed man. But I believe he tried to tell the truth or come to it; he tried to be a person of integrity and ideals. Yes, I am willing to commend that he _tried_. Lincoln struggled to evolve his values into actions and work within the muddled structure of his politics. Don’t we all in some manner struggle and fail to become who we could be? So we might ask, where was his heart?

Lincoln redefined the project of our first failure at America and it’s sullied, corrupted first definitions. Lincoln told us that we are Americans when we are “dedicated to a proposition.” This simple phrase is itself cause for a day, years, a lifetime of contemplation. Dedication here means not race, creed, language, ethnicity, gender—it means that we are all supposed to be equal before the law and that the law must be just for all. Just how do we do this?

Lincoln told us we needed a new birth of freedom because our founders were corrupted by their racism, sexism, their whiteness, and privilege and as men of their age they were captive of all of these assumptions and value interpretations.

But Lincoln knew that we needed a rebirth their ideals in a radical way. He did not live to show us what he truly had in mind. He knew the path was to justice for all.

It wasn’t until Dr. King that we began to learn how to begin that rebirth and what it means to dedicate to this noble proposition of freedom and justice for _all_.

We are in a time in which we need again and again to hear Dr. King’s voice, to reflect, to take his charge and his wisdom to heart. Our rebirth of freedom is in serious jeopardy and our dedication to the propositions of justice and freedom will tell all.

This is a critical inflection point and the powerful, soulful, rich message of Martin Luther King, Jr. has never been more important or trenchant.  It is no ordinary time, for we find ourselves in the midst of a second Civil War. This one a “Cold” Civil War. But we have never been so divided since that first tragic confrontation.

King was no perfect saint because there are no such human beings. He was, however, something better than any perfection. He was a voice of true humanity who like Gandhi and Mandela and others had the audacity to speak truth to power and to lead a way forward. He had a dream that we need more than ever.

I hope we learn to to listen to Dr. King now. Right now. We need that dream more than ever I have experienced in my own lifetime.

Who do we want to be?
Who could we be?
What will it take to become Americans?
Are we dedicated to those propositions?
Do we have the courage to create a new birth of freedom?
Today would be a good day, I think, to live in these questions and see what happens in your own heart.