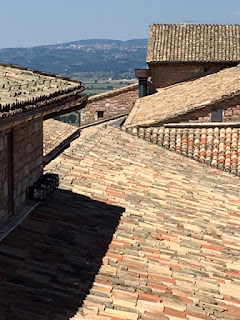 Most people have jobs that don’t allow them to read, write, and think all day. Most people don’t _want_ that job. Reared on manual typewriters the size of Godzilla and more noisy than Mothra, I write so furiously that the keys of computers literally wear through. I would take a screen shot of that if I could. No one ever accuses me of too few words.

Not that anyone should care but I am deeply immersed in a _lot_ more than what appears as long political rants, commentary on the history of religions, and social criticism. Most of what I really do isn’t hard to talk about, it’s just hard to translate in ways that make others care. And no one should mistake their own curiosities for others’ sense of wonder and bemusement. So let me make a real point here:

Living in an age of world media at our fingertips is too often abused, misused, and neglected. Neglected, I say? Yes, for the power of ideas and the creation of community that indeed can happen when we use the wonders of social media for true human purpose. If I may be so presumptuous, we humans in a global world need more than our local communities to survive and flourish. Think of what Trump did this week, isolating, diminishing, and changing the course of history in ways we have not yet fully experienced— there is catastrophe ahead, and we _know_ it. But we must use our words, stake our claims, and foster our relationships with respect for these amazing technologies of communication. We are, I submit, largely failing at that too. Like most of our culture, we lack or are afraid of, or have been taught to distrust seriousness.

I’m not decrying postings about puppies, babies, celebrations, or sunsets. I’m merely pleading for +more+ content, more willingness to use this media to create, to build, to engage in the serious work of communication and community. I believe that that is possible. I believe that we are doing a lot of that and can do more. “Rajanaka” is a community that has never once “met” in its entirety anywhere and likely never will. We have no grand gatherings, and while we gather for seminars and travel together to India, “we” are virtual _but no less real_ as friends and partners in conversation. “Rajanaka” is community because communities are about healthy conversations, the sort that take the value of conversation to heart. FB is a means to that end and there are multiple others. What is at stake is our authenticity and integrity and that we can only know by taking the time to learn more about each other’s ideas and choices.

I’m flattered when criticized for being a relentless critic. I’m less flattered when I’m called “verbose” or “prolix,” but anyone who has the wit to call me “prolix” or, better yet, “prosaic,” has already won my good humor and admiration. It is in our willingness to test our ideas, place them before one another with as much clarity and argument as possible that causes us to challenge our own character.

No one loves myth or poetry more than I, because in these forms of language communication it is not the argumentative clarity of the language but its evocative powers that remeasure our hearts. Of course, all good writing touches heart _and_ mind and so too flows through the body. I think this is what creates “spirit,” the sense that what we feel and understand both are features of the truest sense of self. I’m a hard sell, a tough critic, I don’t like to be bamboozled and, being a kid from New Jersey, you learn that it’s good know there are a lot of things you don’t know. Humility is like criticism, it needs to be part of every worthwhile endeavor.

I mean to do a part, play some part, in advancing the value of community in these media. It can be done when we decide to step up, not to be mere spectators or witnesses. Come and play. Don’t be shy to say what you think. Courage is what you need to claim any virtue. And virtue is too an underrated and too often diminished value in our world. Just by expressing yourself with all your heart, honest to the truth, then you do good. We need more of that because, in America, we being led to believe that the truth doesn’t matter. Speak truth, as best you can, and with that know it may not be rewarded or regarded, but you will know what you did and said. Write on.