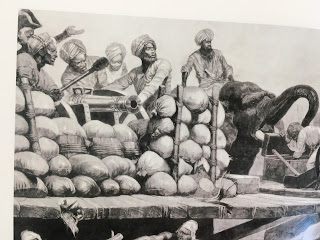 When Lincoln spoke at Gettysburg, the very foundations of country, both its hypocrisies and ideals, were being measured in blood, in the face of the continuance of the morally inexcusable subjugation of people treated as chattel, in a test that was not only for the immediate political future but for the generations to come.

By his Second Inaugural the flawed President was finally able to say that the war had always been about slavery. And in its aftermath, with that institution finally ended, the real work would begin. President Obama represented _some_ kind of evidence of that work. In fact, his Presidency, I would contend, was more than enough to reveal the true character of America. In Trump and Roy Moore, in a wholly complicit Republican Party we see right before our eyes the abject failure of the nation 152 years after our _first_ civil war.

Over the past few days, if it hadn’t been clear before, with his race-baiting and religious bigotry on full display, Trump has made the shameless values of the Confederacy and the deep, tawdry underbelly of America’s failure plain for all to see. Do we need recount what he said to Navajo code talkers beneath a portrait of Andrew “trail of tears” Jackson? Do we need repeat his tweets of a far right party in Britain espousing religious bigotry? Columns down in The Times and Washington Post because the news about our next horror floats to the top we also read of the quiet and calm now descending in Senate chambers as Republicans prepare to pass a tax cut that will at last pay back their oligarch masters and insure a future in which the poor and the middle class will pay their bills. Complicity accompanies Trump’s intellectual incompetence, moral depravity, and sociopathic mental illness. Some 80% of Republican voters are _still_ prepared to support them all, no matter what the poll numbers may be on specific issues.

So let’s put this plainly, and again in Mr Lincoln’s own words. Because this truth could not be more self-evident. And we must be clear: “Now we are engaged in a great civil war, testing whether that nation, or any nation, so conceived and so dedicated, can long endure.” Our second civil war is upon us. The outrage has yet to take to the streets as we saw in the 60s but the crimes being committed by Republicans are as blatant, as barefaced, as utterly brazen as any committed against the thin moral fabric of this nation. We must be more than appalled and ashamed of what is before us. We must turn the political process around: those calling for “tolerance” of these white supremacist bigots— because they are our neighbors and our families— must ask themselves when tolerance is appeasement and tacit complicity.

Trump has the perfect ally in soon to be Senator Roy Moore. Will the voters of Alabama send a different message? Don’t count on it. On Wednesday Moore told churchgoers in Alabama that the LGBT community is source of the sexual misconduct allegations against him. That’s right, “good Christians” in church. In a speech described as “sermon-like” delivered from the pulpit of the Magnolia Springs Baptist Church, Moore told supporters that the “conspiracy” against him was concocted by “liberals, lesbians, gays, bisexuals, transgenders, and socialists.” “They’re the Washington establishment… who don’t want to lose their power,” he said.

Moore’s shameless bigotry mirrors Trump and, of course, warrants no comment from Republicans busy at the pig trough of their oligarch donors to pass their tax bill. Word has it that a few Democrats may vote “yes.” But what you are hearing from Trump is not only the mental illness of a man incapable of understanding the job before him, what we are seeing is the decimation of the institutions that will hold our fragile American democracy together. This is the new regular order: Trump, Moore, and an entirely complicit Republican leadership that means to impose their bigotry and oligarchy without the slightest compunction. Their lasting damage, their dismantling of decency and the institutions of the republic tells us everything we need to know about Republican voters. Who could vote for this vile, bigoted nihilism? Sixty-two million Americans.

Polls this morning also reveal there is a partisan divide, a _partisan political divide_ over the revelations of sexual abuse and assault that infects every corner of our society. Need we say more about this here to understand how riven we are by our _fundamental_ differences in morals and character? We need a reckoning on every front that divides us. That we should be divided by party on these matters too strikes me as all of a piece.

As we head into the holidays I wonder what it will take for Americans to have _any_ reckoning, any acknowledgement that our sexism, bigotry, and racism are at the base of cultural and moral divide. Go to the streets? What will it take for that to happen? We know that the majority of voters oppose these unfit rulers and reject their values.

It is worth citing at some length what Charles Blow wrote today, “The Trump Doctrine is White Supremacy. Yes, he is also diplomatically inept, overwhelmed by avarice, thoroughly corrupt and a pathological liar, but it is to white supremacy and to hostility for everyone not white that he always returns…Anyone who doesn’t see this is choosing not to. They are clueless as an act of convenience, willfully blind and intentionally ignorant. Or conversely, they not only see it, but cheer it….Either way, the people who elected Trump and those who continue to support him are to blame for what they have inflicted on this country…Republicans had a choice of 17 nominees; they chose Donald Trump. The party threw its weight behind him. Many of the candidates who had vigorously opposed Trump, including on moral grounds, endorsed him. Millions of voters who had voted for other candidates also voted for Trump…So never let these people feed you the lie that they voted for Trump only because they didn’t have a choice and they wanted to vote against Hillary Clinton. They had a choice, and they chose the magnification of their darkest demons.”

If America has better angels and if the better angels of our nature stand a chance then we must first acknowledge with candor those who choose the magnification of their darkest demons. If democracy in America is to survive, to even have a chance, we must put to the test our collective moral character.

We must not “listen to” with sympathy those who willfully, ignorantly, passively accept Trump, Moore, and the Republican Congress. Whatever compassion we feel for their plight gives Republican voters no quarter to be so wholly complicit in their failure of character. Their religion has apparently failed them or encouraged their failure, but what has failed is their hearts, their minds, their _character_. They are accountable to this, no matter how they suffer otherwise.
However we accept their frustrations with the failures of a changing economy, their economic woes and social failures pale in comparison to the moral call to arms. With whom do they stand? What really lies in their hearts? We must ask. We need to know.

My own tolerance for their religion, their “culture,” their claims to disenfranchisement has run its course. We must rally to the streets to object to this moral failure of leadership and as soon as possible we must vote them into the margins. The alternative is unthinkable, or is it? Lincoln was elected to draw a line he so reluctantly writ in water until he was forced to say it plainly. Can America endure in this racist, bigoted, sexist divide? What will we do now that our darkest demons are in full view?