Skip to content
March 24, 2017March 24, 2017Douglas BrooksLeave a comment
The Narrow Lot on Fremont Street
A Note about Today’s Gunfight and Your Health
I was born in 1957 in the dozy days of Eisenhower, in the very month that kicked off the International Geophysical Year —sing along, “…what a beautiful world it will be, what glorious time to be free”—and, of course, the movie billed as “The Wildest Gunfight in the History of the West.”  That gunfight would star Burt Lancaster and Kirk Douglas playing little more than themselves.  It was The Gunfight at the O.K. Corral, and I bet nobody remembers that Dennis Hopper and DeForrest “Bones” Kelley were also in the movie. 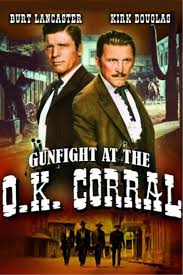 The “real” gunfight happened, we are told by the website renowned for its implacable verity, Wikipedia, to have occurred not at the O.K. Corral but at close range on the narrow lot on Fremont Street.  Maybe some FB friend from Tombstone can provide the disambiguation.  I might add my father particularly loved westerns, though as a boy I never quite understood why.  I mean, we’re from New Jersey.  He really liked that cowboys took a drink before everything important they do —shoot somebody, kiss the girl— and he liked the larger than life-ness of it all.  Today I’m feeling like that extra in the saloon, and I may need more than a shot of whiskey to make it through the end of _this_ movie.   I’m sure dad didn’t want anyone to get really hurt and wouldn’t like the kinds of realistic violence movies we make now.  But everything nowadays, even when it looks absurd, is so damn real.  Like it’s always been.
Today Trump and Ryan are going out for the fight like Wyatt and Doc, and there’s gonna be a big big shootout with the Clantons, played by their own Freedom Caucus.  The Freedom Caucus, you will be reminded, wants you to be free from healthcare, so free that you can’t afford it.  Their plan is that if you are sick, poor, or old then you can just die.  They and their constituency would rather die at the O.K. Corral than give up their freedom.   We all know watching the ’57 version that the Earps and Holliday win in a blaze of smoke and them Clantons, well, they go to Boot Hill.
There is a very, very good chance that Wyatt “winning” Trump and Doc “wealthcare” Ryan will get their proper Tombstone ending.  They may very well “win.” The outcome will be nothing like the movie.  We’ll all die sooner and sicker if that’s the case.  But I’m hoping that Lancaster’s Wyatt Earp is right and that all of these guys go down just the way he says in the movie, “All gunfighters are lonely. They live in fear. They die without a dime, a woman or a friend.”
Trump, Ryan, and the Republicans would prefer we die, just as the Sheriff says.  So let’s hope today serves them up their true 2nd Amendment rights.  Is it too much to ask?  Trump loses, Ryan does his pouting Eddy Munster doppelgänger, and America is given another chance in this anachronistic, fake movie that has become our O.K. country.