I was poking around the web looking for signs of the new Star Trek series that’s coming called Picard. Yeah, that might sound silly for a man my age but there’s a history. On September 8th 1966 when I was 9 years old the first episode of Star Trek aired and everything about the future I could dream seemed part of that world. I never, ever missed an episode. I lived for the next one the way I lived for The Beatles next Ed Sullivan appearance. 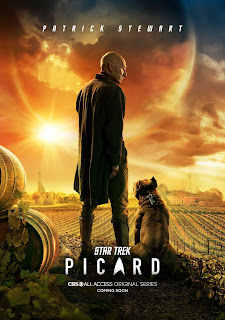 There was plenty about the Next Generation that was just as corny and cringeworthy but something about Picard would always make up for that. Here was a character who wasn’t the 40s-style heroic rake the likes of Kirk but who was no less heroic and with a more reflective and dare I say deeper soul. Picard was always willing to take a serious look at his shadow in a world devoted to light.

As a lad I needed the predictable maudlin, bathetic endings of this better future, all of which began on the premise that we’d survived WWIII and that First Contact (later revealed to be the Vulcans) had changed everything for everyone.

I was growing up too in the grand malaise of Vietnam, then as a college student in Carter’s truth telling, and the rise of the truly vile Reagan—all of which shaped my life because I had a brother and a family deeply mired in this American failure and rather than rise to our occasion we regressed and so began the journey that takes us to Trump. Martin and Bobby were dead. Malcolm never stood a chance. The Beatles broke up.

You might well remember or are you too young? There was that completely phony “morning in America” commercial and then everyone who had a good union job was told that their union was the problem. Next thing you know Democrats sound like Republicans and the fascists make their case again and again. We have a brief shining moment again with Obama but the forces of evil are then more than ever determined to create the future.

There was going to have to be more and I wanted to fast forward to _that_ world, the one Star Trek promised. And marry a nice Vulcan girl. And drift further into space with my logical first mate. Was India supposed to do that? No, that changed everything again but it was the promise of more. Appa could do that. (I finally got it right with the artist version of the Vulcan, which really makes no sense at all. Thank goodness.)
Well, it seems now we might yet have WWIII and I’m wondering if there is going to change. Wondering seriously and not hopeful but apprehensive and genuinely worried. Aren’t we all?

Patrick Stewart recently said when it comes to Brexit in the U.K. and Trump in the U.S., “I’m not sure which of us in the most trouble.”
“I think it’s actually the U.K.,” he continued. “I think we’re fucked, completely fucked.” In the U.S., he said, “There is a time limit to your fucked state, which is four years away.”

But will America imagine a better future and then do the most important thing? Rise and act?

Partisans with character fueled by honesty have praised the Democratic Impeachment managers and so has the mainstream press, interested in the truth, mapping out the facts. Republican Senators are forced to sit silently drinking milk and dozing off. I feel confident that nothing will penetrate them. As lucid and as persuasive as the Democrats case, I await Trump’s defense and the Republicans’ vote. This will be no test of honesty. Neither will there be any display of seriousness or integrity. Rather, those are the qualities that are now testing the American electorate.

Trump will be acquitted and will call it exoneration. November is a long way off in American memory though we can be assured that an “exonerated” Trump will be more vindictive and more committed to using unacceptable power than ever.

Will the people of Pennsylvania and Wisconsin, Arizona and Michigan, Florida, Ohio, Colorado, and North Carolina show up to end this blight? Will Trump accept the results? We need the results first with numbers presumably beyond dispute. What will America do in 2020 to save America?
We need Picard more than ever.