We all want it to stop. Relentless. That’s the part we haven’t felt before. That it doesn’t let up. The turmoil is ordinary but the madness, the depth of the illness, an illness of character and basic decency, is unfamiliar. We’re not used to being under siege, that being a privilege of American life.  Its very forms offend and invite us to wonder how we arrived at _this_ and what we can do about it. 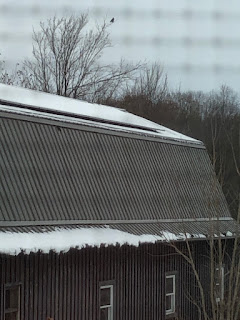 There’s a fair preponderance of opinion across Punditland that Trump is worried, scared, and at the end of his rope. That there will be some fair and just end game too. I’m skeptical of the latter not because the rule of law will fail but only because so few understand or ever consider the idea. That takes effort that is not demanded of the citizenry.

Of course, I know only as much as the rest who look from the outside and I’m not going to dismiss those working in that environment with keen professional eyes. But I don’t think Trump is any more of his deeply problematic emotions than he has ever been, which is to say that I don’t think he is worried or concerned or fearful like any normal person would be. Can we even think about normal anymore? What’s that?

We all have reason to feel anxiety or fear or worry. In truth, we don’t _need_ reasons to feel any such ways: it comes with our humanity. It’s normal, if by that we mean these are experiences selecting us. Life’s ordinary storms come as they do, no matter our preparations or care. What more that is asked from us also will also come from our humanity. But it will require more, more than mere indulgence of life’s precarious terms of survival. To flourish is a ceaseless endeavor; the task to ask for more and that requires skills learned.

We’re not born or naturally equipped to fathom what life presents to us as human beings. We were born with the ability to feel what ordinarily happens and a good bit of that is well beyond our control or comprehension. We have to ask more about what we can be. The deeper resources aren’t provided, we have to invent them. Some never do or can’t. Some chose to pass it off, project it on their God to do the work that they well-understand is beyond their ken.

Becoming more human remains unfinished no matter where we turn to find that more. There are complex reasons for that too, whether or not we care to inquire. Looking for ways to care for ourselves and others isn’t a requirement, it’s an opportunity we must help create and nurture whenever possible. We all work from within worlds that created us and not all seek to create.

Trump, as he always is, is wrapt inside layers of narcissism and self-approval that he’s needed since boyhood. Unable to win father love, learn from mistakes, or cope with his limited cognitive circumstances, Trump has few skills and can only repeat the same strategies. It’s bluster, “charm,” threat, the same old story, same old act. He won’t change any of that because he can’t.

Truth to tell, he hasn’t the emotional intelligence to grasp much at all—ask Rex Tillerson or Tony Schwartz, they know how little he comprehends whether that is intellectual or emotional. He doesn’t want anymore and none of the work. We might reduce it to something pathetic, warranting compassion or sympathy, were it not so debased, craven, cruel, and threatening to our shared fate as citizens. Instead we have a citizenry held hostage.
The majority of us know we’ve yet seen only the outlines of criminality and depravity, that the depth is yet to come as Robert Mueller untangles this sordid tale. But a significant percentage sees a portion of themselves in this sick, wounded, tortured man. They cannot possibly be as wholly debased as Trump because they haven’t had the privilege that fuels his spiraling mental illness.

But what appeals is the power, the ability and audacity not to care what anyone else thinks or feels or does. They want a certain kind of autonomy over their lives; they want to protect what leaves them vulnerable or makes them victim to a world they barely manage, much less control. Trump believes that they will believe anything he tells them and I think, for the most part, he’s right about that. Why?

For that 89% of Republicans who just last week reported that they still support Trump, their needs match his even if their circumstances do not. They _need_ the feeling of being right, persecuted, besieged and triumphant because those are their resources, their means, the ways they cut the emotional deal.

For some others, the especially wealthy, matters are simpler: they use Trump because they want their wealth or power at any cost, they _want_ and the rest can just be damned so long as they can profit. But the majority, the Fox voter, the rural poor, the suburban once-middleclasser feesl a deeper desperation and despair, no matter how that configures into real world problems.

It’s not the desperation that singles these folks out. It’s the different strategies and shapings of experience. I’d wager most of us here too feel the rushing water of the deep blue sea just below the oak plank we use to keep from drowning in the everyday. We hold ourselves upright and know that what keeps us barely dry is a strange alchemy of kindness and terror. It storms too from above, so it’s coming from all directions. Such is a life that promises nothing more but invites better.

But unlike the Trumpists, for whom the desperation has projected remedies and deals in assertions, we look to a different set of emotional tools, feelings that demand more ambivalence and nuance, like empathy and constructive forms of frustration that point as much towards as away. We’re looking for questions as much as answers and the sort that might not answers. Some folks just don’t want that or the consequences.

What’s different for Trump and his followers is that any form of denial or affirmation suffices until the next one and the next one—but the truth that mines the unfinished while admitting vulnerability is cast aside.

Looking at yourself is no small matter. Some, it’s important to remember, just can’t. They never learned, they don’t want to, they don’t believe in the powers of reflection, self-inquiry, or constructive critique. These are not structured into a life of self-learning and won’t be. It’s easier to trade in more sanctimonious forms of assurance, the sorts that reside in more settled opinion or “values” to be asserted but not questioned.

When the world brings its inevitable turmoil or failure ensues and salvation does not, they find redemption in fantasies that come with religion or some other belonging-club, it could be guns or sports or ‘family’, it doesn’t matter, something, anything that says “us and not them.”

It’s harder to take in a world that promises nothing more than the chance to love, accept those costs, and ask for what else is possible that can better a human life.