Skip to content
February 5, 2017February 5, 2017Douglas Brooks2 Comments
How many times this week did you hear or read, “This is not who we are.”  This is a normative statement that we can understand as “This is not who we ought to be.”  It’s also descriptive because in fact that there is a “new” American narrative being written in spasmotic tweets and executive orders.  That narrative is redrawing, in orange crayon and likely in blood, the straight line that has always existed from the Confederacy’s white supremacy entitlement directly past the New Deal, Great Society, and Obama’s Progress. What we should notice is that the veracity of the statement of our who-we-are-ness actually depends on who we are. 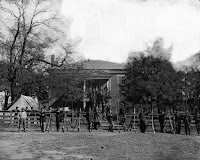 Living in rural western New York one learns first hand that the New Confederacy is not principally a geographic north-south divide.  There are Confederate flags everywhere in my neighborhood and southern pride is not the message.  There are more variables than this one but America’s divide is still a story that possesses the nearly inalterable calumny of race.  We’re told that when we raise this demographic fact that spills into the Trump suburbs that we who mention it are the racists.  (I was explicitly told as much yesterday. Gaslighted as a racist is the new orange.)  In the world of alternative facts denying such revilement only proves it.  But the not so implicit racism that is the usual accoutrement of authoritarian populists will also include the exclusion of a host of others.  The assault on LGBTQ rights has only begun, on women’s reproductive rights, on science and healthcare while Mexicans, Muslims, regulations, tax relief for the Uber-pun-intended wealthy are already in the real mix.  Need we mention impending war with Iran, China, and koala bears brought about by the uncontrollable ranting of an egomaniacal nine-year old who happens to be the leader of the free world?  We know what we’re in for.
This President*, Actual President Bannon, and their coterie did not emerge from nowhere.  This toois who we are.  To deny that is to attempt to write over the more broken lines that saunter their way through America’s stories of colonialism, slavery, native people’s pogrom, homophobia, sexism, etc. in order to make ourselves feel better about progress.  There was progress, there is progress, and we fear rightly it might all be rewritten.  One hundred fifty-two years since the surrender at Appomattox Court House and whatever we deem progress may well be erased.  It can take a long time to scale a mountain and only a second to leap off the cliff.  We’d be fooling ourselves if we believed this untrue, and not only because we believe it.  Facts remain in the alt-fact world, no matter what the next WH Spicer Conjob spins.
We hear a lot too about composing a new narrative that will include everyone, especially those aggrieved Trump supporters and whoever else feels “the system” is too broken to fix.  It may well be but who thinks anarchy is the better choice given anarchy’s palpable examples all over the world?

Returning to the Confederates, we might remember how they proudly rationalized their “lifestyle” —that’s an alt-fact term for “slavery”— with the Bible and the gun on the backs of Federal prosperities that nowadays take the form of Red State entitlements paid largely by Blue brethren.  We can hear them still proudly rebel yelling that we need to be great again.  And that is the key word that seals the deal: we once were better and we’ve lost something.  Trump has merely re-elevated the familiar barbarity in an effort to secure those blessings of anger, fear, and domination.  This is the part of old-fashioned religion that rejects change and almost anything new that requires adaptation and revision.  Most of all it rejects admission.  To change we have to admit that something about what we have been doing needs change.  This might also mean that something about who we are needs to change.   And so that means asking ourselves if that is really possible.  Can we change who we are without admitting that our current we is endemically flawed, flawed perhaps to its very core?

If such admission and change is possible, it’s going to hurt.  Who wants to admit that there’s something wrong not only with what you are thinking, saying, and doing, but with who you are?  We might say those are all the same thing.  But we might also say that something deeper needs to happen.

For there to be a new American narrative, a narrative for all of us, we are going to have to explore the American soul.  I remain open to the possibility that America does not need one narrative at all but there are lots of practical ways in which we must create an ethos beneath a common set of laws.  Without one set of laws that apply to all of us equally is justice even possible?  So we need not agree with one another but we will need the same laws —women’s reproductive rights stand out as do those that insure education reaches into communities traditionally disadvantaged.  (Affirmative action is a bias I strongly support and without such laws our schools will only serve the privileged.)  But the law is never a narrative itself.  Rather it is the foundation for a narrative, a basis upon which we are already telling the story.  When we dismantle Wall Street regulations that protect consumers from predatory lenders or conning investment brokers, we are telling a story with our laws.  Who are we?
A new American counter narrative to Trump’s New Confederacy will not be all-inclusive.  It will will neither include all who agree to oppose the tawdry white supremacist underbelly anymore than it will persuade his supporters.  The middle ground is apparently occupied by those estimated 40%, the 92,671,979 who did not vote, because we know that most everyone else has very strong opinions.  That we are a nation divided should be as self-evident as any of those truths we have yet to live up to.
If there is to be a different America, one that survives Trumpism, it must also be one that tolerates “conservatives” but restricts their governance.  That is currently the opposite of what is happening since half of the American States are governed by rigorously ideological conservatives and all three Federal branches.  If you believe that is not the majority of Americans, the facts of power and authority are currently self-evidently opposed.  What is next?
Who we are will be largely decided when people decide that the question really matters.  I mean, really matters.  Americans are not particularly introspective, we fancy ourselves doers not thinkers.  Americans are usually either shamed (liberals) by the continuance of structural failures or dismissive claiming we’re past that, cured of (conservatives) our deplorable histories of oppression.  We begin in alternative narratives, but not in alternative facts.  The chances of changing the American character, to become more reflective of history, more responsible to the truths of the past, or to win the battle with education are slim at best.  We need another strategy.

First we need to understand America’s conservatives and take them seriously. Conservatives fought against all of the freedoms of a diverse America from the outset, and they’re still fighting against them today.  Liberals know that we can’t go back. There is no future in which we will tolerate the loss of voting rights, the denigration of immigrants and brown people, a woman’s right to her body, or that gay people are people too.

So if someone has to suffer because our modern liberal narrative conflicts with the Great Again, then let it be those demanding a return to ignorance and simple-minded solutions to complex problems.  Ironically their Trump sycophancy and conservative “values” will create enough pain of its own accord.  The impending catastrophes and horrors of these philosophies and their their implementation will surely be visited upon all of us.
We will try to right those wrongs as soon as we can.  We must tell ourselves that in the long run the conservatives have always been on the wrong side of history, that human decency and morality will win out.  But that depends upon one more thing.   Those who oppose such regression and oppression must convince those in the middle, those who have opted out to ask themselves who they are.  We must convince ourselves to compromise with each other because the conservatives have proven that they want no part of that compromise.
Liberals are too deeply flawed, because that is to be human.  We don’t possess the answers and we have failed each other and ourselves.  Are we clear about that?  But which differences will make all the difference?  Whose values will decide the laws under which we will struggle to govern a discontented whole?  That is the heart of the matter.

There must be a new narrative that confers the dignity of difference on all of us within the American story, one that works with the law and serves as the foundation for justice.  If America is too diverse to be any one culture or group, any one ethnicity or language, if we are founded on propositions and laws, we cannot rely on shared values.  We don’t all share the same values.  Rather, we must each ask ourselves if we will be governed by the values of those willing to share.