Skip to content
September 23, 2018September 23, 2018Douglas BrooksLeave a comment
There are any number of articles in the past few days and, given it’s Sunday, there will be more today in which reasonable people will say reasonable things about the Kavanaugh nomination, Rothstein, and Trump’s madness. All of these presume we as Americans are playing the same game. Unless we all pretend we’re in this game, that is, as those resisting the Republican objective, there may be nothing left. But let’s first clarify why this is a game and why that is not a trivial way of putting it.  Fans of democracy need to take note. 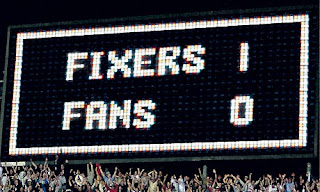 By “game” I mean the rule of law as well as the traditions and ideals that are supposed to protect the rule of law and the function of our democracy—however incomplete, corrupt, hypocritical, and craven that project of government is both now and historically. Do Democrats in power really suffer this misconception that the current Republicans and “conservatives” are playing by the same rules or mean to?

Republicans are interested in the game only insofar as it is a means, an excuse, a pretext for their objectives of power. The Democrats mouth the words of the game (i.e., the rule of law, democratic institutions, etc.) and the press follows with the revelation of facts, analysis, and the hope that someone like Robert Mueller “still” stands for the law as such. They repeat how this or that is some really big deal because the abyss of tyranny is real and far too grim for most to accept.  We live in a surreal mockery of democracy built on the strength of differences that must be treated with respect and addressed in ways that allow us to live with slightly less than tyranny.  Unless Democrats participate in their own self-deceptions about American democracy’s functionality they are left with nothing but the facts of tyranny upon us.  Tyranny is upon us.  It’s a tough one to admit.

The irony that Republicans (and Democrats on the left) claim that Hillary was the fix is a treacle of Orwellian doublespeak worthy of, well, Orwell.  Secretary Clinton proved that America is not ready for seriousness, whether or not you agree with her ideas or believe she represented corruption.  Politics is always corrupt, can we admit this? How else does one answer to all that money and all that power and all that it entails? We must measure in quantities, not only qualities.  We must understand that the best democracy involves compromising to your adversaries and finding a way to live.  Perhaps it could be less corrupt?  But let’s not digress from the moment.

Democrats and the press may _have to_ act like this because it is the _pretense_ of democracy that is all that may be holding us together. What you will witness this week in the Senate—and have over the course of the Kavanaugh hearings— is something more craven and more honest. You see, Republicans don’t care anymore, if they ever did. Trump has given them license to come out, to show their hand. The game is now for all to see. It is not a game at all. The fix is in. McConnell counseled patience because, well, they have the votes and the power and whatever they want will come to pass. The rest is all show. Republicans believe they are _entitled to rule_.  Governance by compromise, by shared interests, governance that demands we live by imperfect accommodations of difference, that is not their agenda.  Not. One. Bit.

What Republicans know is that government is professional wrestling: it’s there to entertain, at best, the mob and create a pretext for cashing out and working their will. The Court is simply the most explicit example of their patriarchy and their claims to power, entitlement, and _rule_. Put another way, governance by democracy is a pretext, a sham because Republicans mean to _rule_. Not just Trump, not at this point. It cuts more deeply. And they will do or say _anything_ to do that. Nothing is beneath them. Nothing will stop them. There is nothing to persuade. To bring this to fruition requires the affected, adulterated, spurious appearances of democracy. But they care not a fig for that or anything else but their entitlement to power.

This is their moment. An election could (temporarily) thwart them. But they will not relent and for as long as they maintain their power, they will do anything to keep it. This is why even an election may not function any longer; they have help from their authoritarian allies, the big money, and theirs dupes who long to be led, to be _ruled_ and to rule over those they despise.  That would be us.  Clear?