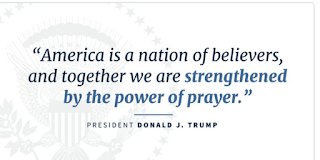 the little children and the press because she finds out watching TV that everything she has been told is a lie. It’s a shame she didn’t come to that conclusion in the pews about twenty years back. But, alas, Sarah is the Believer, the Trump voter. Not the only sort, because there are even more venal and ignorant sorts, but the kind that has proven the most loyal, the Evangelical.

Trump was right yesterday when he declared America “a country of believers.” What he knows is that a significant percentage of people, and all of his 89%, will believe anything that soothes their need to believe. People have a need to believe that far exceeds their abilities to assess the facts or address them rationally.

What we have always known may cause Sarah to shake and even stumble a bit, but it won’t matter. It won’t matter anymore than it does to, say, Paul Ryan or Mitch McConnell who know it’s fraud but are merely determined to fulfill their commitments to wealth redistribution. Nothing will move this Congress to act: no lie, no breach of decency, no report from Mueller. Nothing. They don’t need Sarah’s faith because they can add: the Kochs will provide their future. But what about the believers? Count on them to believe.

Of course, Trump has no plan. There never was any credibility. This is all simple fraud. But it’s a lot harder to see when you have been raised to believe the machinations of Bronze Age goat herders telling tales of rising from the dead. You’re well-primed in the will to believe whatever you are told when you have never questioned faith itself. For those with even a marginal grip on the implications of science, faith can be part of a complex art of the possible, a component in the making of a future by using predictive values to create change. What has happened allows you to believe in what might happen. But for the truly faithful, faith itself supplies the delusion; faith nurtures hope not in what is possible but rather in the assurance and consolation of what is not.

An incompetent narcissist is making it up as he goes along. And just like his entire bid for the presidency, the whole matter is the continuation of a publicity stunt gone awry. It’s a circus act, a carnival tent with barker and charlatan preacher. It must have been quite the usual scene at Ouachita Baptist University.

Sarah Sanders wants more daddy, a savior who can’t be wrong, who has her interests at heart, who will take on those intent on undermining her faith in faith itself. She wants to believe and nothing like the facts, deceptions or lies, nothing at all will change her faithful heart. Like so many Americans, reality is just too hard and faith is the necessary delusion to make it through until the next lie, the next huckster preacher tells her to rejoice because her reward will be great in heaven. It would be merely pathetic if it weren’t bringing the country to ruin.