It’s interesting how many people seem to find Trump’s words and actions baffling or incomprehensible. Too many pundits take these questions seriously. Is it because they need TV ratings? Many dissect the words for truth or try to point out the seriousness of inconsistency or fakery. But this is more than is required to understand what it going on. It’s not easy to tell ya’ this, but it’s all a pieca’cake. 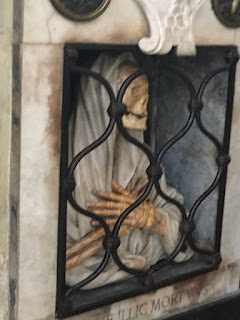 Trump is a bullshitter. They are easy to spot and they are nothing if not consistent. As self-aggrandizing, bullying egomaniacs they are know it alls that aren’t quite know-nothings, except when they are. As leaders they confidently take you where they feel your impulses and emotions want to go. Their own emotions are momentary and real but never lasting or deep. This is why they can fake sympathy but walk away feeling nothing. Then, when things go wrong, it’s always someone else’s fault and it’s time to change the story. That could be only seconds away. Bullshitters are quick to change even when you know they aren’t having an easy time of it. They want you to think they are. Nothing is hard for them except everything that requires seriousness. Think of seriousness as the opposite of bullshit.

I assure you that Trump is far more confused than he is labyrinthine. He is incapable of being a serious person but this lack of real gravitas is not required to perform bullshit. “Serious” persons think, admit nuance, allow uncertainty and ambivalence into complex worlds, etc. None of this happens when you _are_ a Bullshitter, which is different than indulging in bullshit. You don’t have to read books like Obama to be Serious but you have to have a capacity for genuine substance, even if it’s stupid substance like you see in Ayn Rand’s boyfriend aka Eddie Munster Ryan. There is a touch of gravity even if the “serious” thinking is really lame.

For the Genuine Bullshiter, like Trump, it’s a full time job: he thinks he’s being funny or just talkin’, trash talking, meaning something else, something _more_ than what he’s actually saying. When you are _with_ him, you get that more he wants, the way Republican dupes feel about his obvious bullshit. When you call it out, you get dismissed or just hated. Trump is always looking for the laugh when he’s not trying to command, to scare you into submission, or win your approval. He wants you to gang up and let him lead the gang. This is why allowing a Genuine Bullshitter lead a democracy is like asking for fascism.

Bullshitters aren’t stupid but neither are they hard to solve: they aren’t deep, but can bullshit you into believing they are. It can require a keen eye because bullshitting is as much method as substance; it’s something you _do_ even if it’s not the whole person. Trump _is_ whole, and nothing but a bullshitter, so for him it’s not a tactic or an imitation. These types have an uncanny way of bringing people along with them, showing them how it’s done. Sessions straddles the lines between using it and being it, ’cause yesterday he did a fine job of both and so did that irksome jape Cotton from Arkansas. Neither of these good ol’ boys have the Queens Touch (that’s “borough of,” not “ER [crown]”) but what you saw them do was take a page from the Bullshitter’s Handbook. (If you use your other hand it will feel like someone else is doin’ it.) You gotta hand it to them, they are learning from the best.

“Professional Wrestling” (an oxymoron not unlike “Spring Semester” in Rochester, New York…I mean, have you ever been here in March?), this, this was a great fit for Trump. It’s not that it’s easy nor are the players not getting really hurt or applying real muscle. It’s that it’s based on bullshitting. This can be deadly and often tragic but it is not the same as serious, deep, or “really real.” Pro Wrestling bullshitting is a kind of honest bullshitting ’cause everyone knows it is. This is how it sells to midwestern nice people too. Some find it entertaining (really, they do) but it lacks the formality of boxing, the sheer dangerousness of some sort of cage reality fighting, and it’s _nothing_ like the real horrors of real war because it wants to bypass the byways that go straight to the heart.

It’s not that bullshit is not happening or is just fake, rather it means to use illusion to keep you away from the facts, like the magician sawing the woman in half. To compare, Penn & Teller play a far more complex game of bullshitting because they imply that they are keen to the bullshit, you are baffled as entertainment, and everyone is invited to like it, no harm, no foul, it’s genuinely hard to do. Trump is neither Penn nor Teller. For him bullshit is what he thinks life _is_: life is a show, not showing up for the hard stuff but putting one on, it’s putting one over people all of the time, and then moving on to the next one.

Yesterday on the Senate Intelligence Committee the serious people in the room, looking to ask serious questions and get honest answers were thwarted, frustrated, angered, and disregarded, Team Bullshit did it’s job. Add some derision, outright misogyny directed to the very smart woman Senator, insouciant disdain for the truth, and straight faced lies and you have Bullshit Salsa as the condiment.

The grumpy old white men like McCain don’t like bullshit much but like bullshitters they too can be in over their heads. They hate that. The genuine war hero McCain can’t _hear_ someone like Kamala Harris because she is a woman, her sentences are complex, and grumpy old men don’t like being overwhelmed. Bullshitters, on the contrary, are far more easily overwhelmed and usually in over their heads but never, ever show it. McCain made his tell. He interrupted and sounded angry and serious. The Bullshitters either didn’t speak (this is their version of dismissal) or then spoke in perfect non sequiturs, the opposite of taking anything seriously. Bullshit is the response meant as the alternative fact. That’s called lying with a straight face.

I know there is a good philosophy book about bullshit and someone will reference it below. But it doesn’t require solid academics to nail it when you see it. You just gotta know that you’re getting hammered. Everyone is part of the mess it makes, no matter how hip you are to the tell.