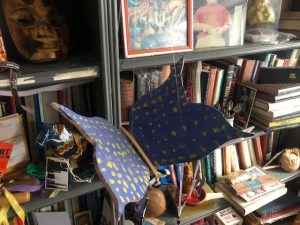 The State of the Union is on the line. There will be a tomorrow one way or the other. It’s going to be hard even in victory. I am thankful for all of those far more vulnerable than I who have had the courage and the goodness to protest, to show up, to vote. They are the soul of the country in a country that we must also admit is soulless, craven, and incorrigible.

Biden may not have been your choice but he has defined the matter appropriately, in the right words with the right tone: it is the battle for the soul of the country that is truly at stake. And you will have to admit that Biden has run a far more disciplined, honest, and nearly gaffe-free campaign when none of us thought that was going to happen. It’s hard to follow someone as charismatic and talented as Barack Obama and the machine turned up against him has largely failed: if he doesn’t win the failure will belong to America.

Trump is indifferent to death and suffering, bereft of any truth or shard of decency. The choice isn’t yet for policy and the arguments that will ensue. It is for sanity. We must get through the worst of it and then see if we can rebuild and transform in ways that admit to shadows and real failures and not forget that human ideals must never be forsaken despite hypocrisy and systemic failure. Remember that Trump wants us to think it’s all for suckers, all fake and fraud but our selfishness. It must not be.

The American political “Founders” didn’t imagine much less share our ideals even if they provided the most important words. Liberty, equality, justice— we all know the words because they their meaning has not be realized and even if we can’t imagine how to make all of that real, we must imagine that it is real just to make life worth living.

I can assure that desceration will continue to happen even if we win. I think we are feeling frail today because it has been three, almost four full years of this vile madness and it is exhausting.

He doesn’t tell lies, he is a lie. There’s no hidden strategy to destroy the country, it’s all out in the open. The told us what they were going to do. They don’t give a fuck. Not about anything but themselves and that seems to be our complaint about his cult too. Trump will be president win or lose today and we must do more even to make it to January. We will not give up on each other no matter what happens. We can decide after the results what is worth saving and then what is worth creating, if we can.

The world may forgive us this mistake but should not forgive us if we make it again. Will anyone take us or want us? But to remain in a country that demonstrates nothing better than a wanton disregard for human life, that will ignore disease and tear children from their families, that will no longer be a country my family will endure further. I am sincere in my wish that this does not come to pass. And we will know soon enough.

We will soon have the next thing before us. In the meantime, hold fast. Tonight we will have a  Watch Party.   I’m bringing Glenfiddich along not because it’s my favorite but because it was a gift and I will love it more than what is my favorite because it came from one of you. We will do whatever it takes, together.