Skip to content
March 23, 2020November 21, 2020Douglas BrooksLeave a comment
It’s always problematic to take on a sweeping generalization and emerge with anything like facts or the truth. The scenes of Florida and California beaches, Mardi Gras, and other Spring Break revelry are pretty darn disturbing. 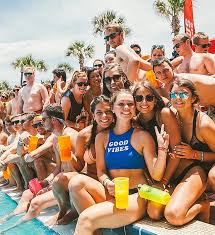 The pressure on politicians to keep business going has apparently outweighed public health concerns in the midst of a deadly global pandemic. Profit before people is capitalism without conscience or care. We have had advisories or abdication, not government directives. And where too is individual responsibility?
We like to think that we all make personal and individual choices but this explanation also allows us to dismiss or abdicate. People are moved by leadership and by social directives, implicit or otherwise. We move not only as individuals but in groups and tribes and communities. We have survived and flourished because we are socialized and it’s simply too reductive (and oh so American) to suggest that individual liberty and choice directs our actions.
To put this in the modern meme, “influencers” influence. And the most powerful influence is one’s peers, that inchoate but real force that forms our proximate social identity. We feel that ethos, we share worldviews or, at the very least, we contend within that kind of group as we formulate our individuality. I think there are plenty of reasons why in the “OK Boomer” world wonder why college age students, those under 30 are acting so…let’s put it plainly: recklessly. May I remind my fellow Boomers that we came to distrust our elders too, coming as we did on the heels or even from within the era of Vietnam and the civil rights movement. We pushed back too. We distrusted and estranged ourselves. Our parents thought us reckless too.
We did, however, have our generational leaders: JFK, RFK, MLK, Malcolm and McCarthy. All flawed but standing for something else and against the worst of it. In contrast, and let’s be frank, Senator Sanders could not muster that youth, could not get them to the polls. That is plain for everyone to see. That Democrats are terrified that young people will not vote in November is a well-founded fear. Any equivalence with Trumpism I will simply reject outright. This emergency could not be more of an emergency. We are told that leaders are not providing what they want or offer a world in which they aspire to participate. Then we see them on the beaches and in the bars during a pandemic. The mistrust is mutual.
As loathe as I am to say this, nothing is going to change the behavior of the beach going Spring Break generation but rules enforced by grown ups. The problem is that leadership at the top, at the Federal level, has proven so desperately incompetent. We all knew Donald Trump was unfit and that the worst was yet to come. And what’s really scary is that the worst has NOT yet come. Governors have stepped in, like Cuomo and Newsom but not all. Wait until Florida really starts getting sick. Does anyone think that isn’t going to happen?
I write this morning because I need some perspective. We knew about war and political corruption but then let the planet burn for profit. We protested for peace and a Great Society and then let jobs and poverty and opportunity fail the majority. These kids (<—yeah, I just said that…) may not consider our failures because they, in truth, don’t remember and were never taught those lessons. The things they don’t know are legion. Trust me on that, I teach college. But what they have that is all their own is a toxic blend: their own certainties and a frightening kind of nihilism.
Some push back, like the Parkland kids. But they all see a burning planet, a gig economy that promises the majority less than their parents prosperities, debt, and, for most, politics as nothing but failure. They have reasons to take nihilism seriously. Their certainty may be a very different vaguery of youth but mix it into a cocktail of “well, I’m just going to do what I want because there’s really no future anyway…”, that is the danger we must consider.
We who protested war and poverty in the 60s and 70s may have sold out to profit and bourgeois prosperities but that may be because we imagined that there would be a future. I fear that what we are seeing in the Spring Break Pandemic Party is a generation that believes there is no future but to party, and party together. Who do they trust but each other? Not us. And that portends a very dangerous immediate future.
This virus won’t care how old you are once enough people are sick. The misinformation train, especially from the right wing media, will only further divide as McConnell and his lot see another chance to line the pockets of their corporate donors. We’re going to need leadership and sanity. They are in short supply but not completely absent. Let us hope more people, especially young people who are the future, are willing to listen to more than each other.