Skip to content
March 1, 2018March 1, 2018Douglas BrooksLeave a comment
Thursday, March 1st 2018
Sayeth The Lord, Another Year, Another Midterm
Or Why Lamentations is my Favorite Book

Today while a grifting carnival barking evangelical charlatan lies in state in our nation’s capital being eulogized by a president who just paid off a pornstar, my students will suffer their own reckoning with The Truth. They are taking their midterm examination. Vengence is mine, sayeth the Lord, so it’s a good thing that they have only me to deal with. The Lord obviously is having his way with me too since this is the THIRTY-FIRST time I have given THIS midterm. Joke’s on me and lest too we fail to cite Matthew 11:24, “Nevertheless I say to you that it will be more tolerable for the land of Sodom in the day of judgment, than for you.” Your thoughts and prayers are most welcome. For me, for the students, not necessarily for those other two other guys who deserve, you know, only more of the same. 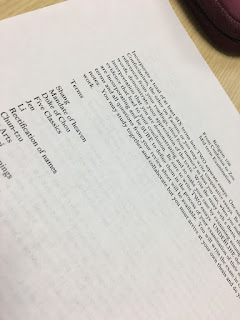 May Robert Mueller channel the Prophet Jeremiah, “The one who flees from the terror will fall into the pit, And the one who climbs up out of the pit will be caught in the snare; For I shall bring upon her, even upon Moab, The year of their punishment,” declares the LORD.” (48:44) May this be HIS year, if ya’know what I mean. And as for the Reverend Billy, I am sure he is getting his too. Right now. Still dead. But before I cast any more stones*, I know fersure I’ll get mine too: “For the Lord of hosts will have a day of reckoning against everyone who is proud and lofty And against everyone who is lifted up, That he may be abased.” Now it’s been awhile since I’ve been formally abased but unlike Keith Richards (*now I cast Stones not stones), I may in fact not LIVE FOREVER. (Don’t you love it when Bible translators use arbitrary capital letters?)

If YOU had to read these midterms, you wouldn’t choose eternal life either. More like Groundhog Day. So I lament and, yes, I will have cheese with that whine too,
“They have heard that I groan; There is no one to comfort me; All my enemies have heard of my calamity; They are glad that You have done it Oh, that You would bring the day which You have proclaimed, That they may become like me.” Lamentations,1:21

ALSO IN THE NEWS:
These Guys Need YOU*. Not Even Kidding.
(*really not kidding)

Mick is going to be a father again at 73 and Keith had something, you know, to say about that. But what REALLY upset me was this, “I AIN’T GONNA BE around forever—not even me!” That I will not abide. We live without John and George and David and Lou and it’s been forever since Jimi and Janice and Morrison. But Keith is the PROOF, the LIVING PROOF of the rāsayana vamācāra—alchemical lefty— Tantra: ingest heroin, cigarettes, do whatever the fuck you want, and never die. Never.

Now as for those children, Keith really was way outta’ line, ““It’s time for the snip — you can’t be a father at that age. Those poor kids!” Mick the Stay At Home Dad, Mrs Doubtfire the Sequel, ME? Well, it _was_ me. A long time ago now.* (*not really that long ago but thank goodness it feels that way…) My own father would have had 10 kids past me —he was 52 when I was born but for my mom. Why? He was ever frisky, never home, and incapable of denying the urges of his DNA* (*insert proper Dawkins footnote here). I think my real father is likely Mick. But that’s another story.

As for the two eating each other alive in public. THIS is why I NEED YOU. What these two guys need is YOU. I’m not even half kidding. If they both had a bigger band—just slightly bigger than, say, JUST EACH OTHER—it wouldn’t get to the public. Case in point. EVERY time I am about to do something REALLY stupid, SOMEONE OF YOU intervenes and says to some other one of you, “don’t you think we should tell Ji that his fly is open…” And I listen because I know better than not to be ALL OF US as far as that is possible. Men left to their singular devices are never better than Trump. Always make sure that there are enough folks in the band for at least two keyboards and a percussionist in addition to the second guitar and the drummer.* (*drummers…need we say more?) What Keith REALLY meant to do was quote Tenneyson to the Wall Street Journal, ’cause, you know, never tell anyone but an Ayyappa what you are really thinking.* (*ummm, no shit)
“If I had a flower for every time I thought of you, I could walk in my garden forever…” Thank you, Lord Alfred.

Scariest Thought of the Day

THIS guy could well be the next Senator from Arizona. NOW, insert Rod Serling, watching from behind, “There is nothing in the dark that isn’t there when the lights are on.” And NOW THIS:

“I can read his mind without even talking to him. I think he may be reading mine,” said the former Maricopa County sheriff, Joe Arpaio. “Is there something that goes through the airwaves? Mental telepathy?”